skip to main | skip to sidebar

I'm so happy. For those of you who are not aware of the happenings in South America regarding Chavez, this may be confusing for you and believe me, you don't want me to go into detail. In short summary, The Venezuelan president, Chavez, is a dictator who has gone as far as changing Venezuela's constitution to make himself president for life. He is a dominant player in Latin politics and there is good reason to keep an eye out for him. If not watched, Venezuela and other South American neighbors could become communist nations.

The reason I am happy is because, for some time now, Chavez was brought into Colombia to work as a mediator between the rebel groups and the government to negotiate the hostage situation for thousands held captive. This was just one more way that Chavez had a major foot in the door to a neighboring country. No doubt, his intentions were all but innocent. Well, after breaching several of Uribe's (Colombian president) requests for privacy, along with some other invasive methods, Colombia has cut Chavez off! I'm so thrilled. I have been keeping a close eye on Colombian news lately and was in fear of their relationship with this dictator. It always seems to go down hill when somebody like him becomes a hero to the people. There is no stopping tyrants who gain public favor. For now, he has to keep his paws off my future home!

For more info, head to www.colombiantimes.com That is the website where I get most of my info.
Blessings
Zoe

Happy Thanksgiving. I hope that yours was as enjoyable as mine and that you have been filled to the brim with love, family, and lots of yummy food. I certainly enjoyed sitting around the table and dining with my loved ones. Since this may be my last Thanksgiving in the States for a couple of years I tried to soak in every moment and every flavor.
I want to make you aware of a new feature on my blog. If you look to the top right corner you will see a link to view my "Web Gallery." I have discovered that I can load about 100 pictures onto that sight in the time it takes to load about 8 on here. Plus, you can see some fun video as well. I'll still be posting pictures on here occasionally, but you'll be able to really experience things with me by visiting the gallery every now and then.
On to the big news now....the following pictures are of my temporary home that awaits me in Costa Rica. I have decided to live with a local family in order to enhance my language-learning experience. My Big Brother and Sister at the language school graciously took the time to check out a couple of locations for me and this is what we finally decided on. There are pictures of the outside, inside, host mom, and the park accross the street. I will have my own shower (in my room), and will share the toilet located just outside of my bedroom door. Enjoy!
Oh-there are brand new pictures and video of the Thanksgiving feast that we just shared only a few hours ago. Those are on my Web Gallery. Check em out! So, I think I'm definately in my MID-20's now. I guess that's good. I enjoyed the day thoroughly. My long time mom #2, Kay, came down for a visit. We did girl stuff like shop the mall and eat a yummy lunch out. Saturday was the little brithday get-together and that was nice as well. Mostly, I just had a quiet birthday and got some great gifts. Dad-a recorder that I need for language school, Patrice-a really cute jacket and red shirt, Tracy-a $24 gift card, Kay-a great watch that I picked out and some cute purple jewelry, and Nicki-tickets to see Brian Regan and a delicious dinner. Tomorrow is back to work but to see some fun pics from the various events head to my Web Gallary-link is located at top write of the page. Here's to my 24th year of life!
Zoe

Fresh off the Tarmak! Friends and family! Miss y'all!
Well, just got off the plane from my trip to Arizona. I went out there for Farrah's wedding, my cousin. What a beautiful bride! Mrs. Farrah Silva...you go girl!!!
So, I came home to a most delightful surprise...a phone call from Costa Rica! WOOHOO. Could it really be that soon? So, their names are Mike, Erin, and their daughter Madison. They are the Pettengills and are my big brother and sister as are assigned by the language school there in San Jose. Would that make Madison my big/little sister? O-well. It was so exciting. So real! January 2nd is going to arrive faster than I can say Continental Airlines. Anyway, I spoke with Mike and he informed me that they are lovingly (my translation) searching for the perfect place for me to live while I'm there. So thoughtful! The Lord is taking care of me and I'm not even there yet! The Pettengills are studying Spanish as well and intend to move to Honduras next summer for missions. I have linked their blogs on this site, so take a peek if you can! This trip to Arizona was the last big thing before my departure. Well, Thanksgiving and Christmas are coming, and I'm excited about that. AND....my birthday! Woohoo! 24 on the 13th of this month!
In terms of support, I'm on the final leg here folks! But I'm waiting patiently for some churches to give the final say on whether or not they will support me. I have total and complete peace about everything! Know anybody who wants to get a foot into missions but can't take the full plunge? Supporting a missionary is an AWESOME way to participate in what God is doing over seas! Be checking your mailboxes as well for my fall newsletter. Until then, happy holiday planning!
Bendiciones!
Zoe "Daniela" 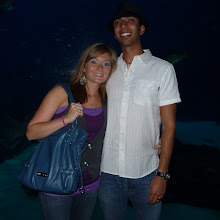 How often do you use a search engine such as Google or Yahoo? Have you been praying about supporting me financially but, with the sluggish economy are not able to do so at this time? What if you could do both, at once, for FREE?

Click here: Zoe's Benefit Bar to download a toolbar onto the top of your screen. Provided by Yahoo, this toolbar will work as your trustworthy search engine and, every time you click on a sponsored link of the search results, you'll be sending me 10 cents! If you do it 3 times a day, on average, that is 30 cents. And if 100 of you faithful readers click three times a day, you will have supported me $900 in a month! Who knew 10 cents could pay off in such a great way. What a blessing!

It'll take 2 minutes to load the Benefit Bar, its as easy as click-2-3! For more info, go ahead and email me.

For more information please, please email me at aaronandzoe@gmail.com.

For information on how to give go to www.lam.org. Click the "donate" link and "to a missionary". Find my name and picture on the SECOND page and follow the instructions after clicking on my name!

Thank you for showing interest in our ministry!

Visit my friends at...